/ˈkanəbəˌnoid,kəˈnabə-/
any of a group of closely related compounds which include cannabinol and the active constituents of cannabis.

The list of cannabinoids below are differentiated between major and minor occurrences within the cannabis plant. These terms are defined by National Center for Complementary and Integrative Health, or NCCIH, and can be found in a study conducted by clicking here.

Check out the tables below for a breakdown of the list of cannabinoids in cannabis. Remember, these are only the known cannabinoids found in the cannabis plant. The likelihood of there being more cannabinoids that exist is quite high.

We’ve also included the two primary endocannabinoids, Anandamide and 2-Arachidonoylglycerol for those who are interested in what the body produces.

Each cannabinoid profile contains the name, chemical structure, how it’s used, and a list of potential therapeutic benefits. We stress ‘potential’ because even though we understand that some of these cannabinoids can help people, there haven’t been actual clinical trials on most of them – so we can’t officially make the claims. The FDA is very strict on this. All known cannabinoids do not necessarily offer benefits, so we have to be careful in this regard.

At New Phase Blends, we try hard to link all cannabinoid profiles to peer reviewed studies and trials. Contact us with any developing information you may have, and we will review it. If you have any additional information you feel would fit well in this comprehensive list of cannabinoids, please feel free to contact us.

**Looking for cannabinoid information that you don’t see here? Have further questions about cannabinoids? Please email us with your request, and we will get back with you as soon as possible. Please keep in mind that this is a free service, and our queue is normally filled. 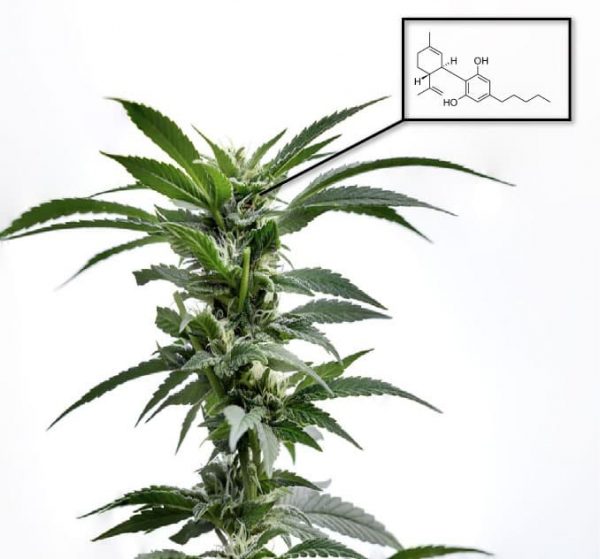 What are Minor Cannabinoids?

Minor cannabinoids are contained within cannabis, but in lesser amounts than major cannabinoids. It is becoming more and more difficult to classify minor vs. major cannabinoids, because of how good humans are at making specialized strains. These strains can be high in almost any cannabinoid you can think of, although some are easier to produce en masse than others.

Cannabinoids and the Human Body

Many people are trying to appreciate cannabis’ anti inflammatory benefits as it slowly acquires legal status worldwide. After all, mental disorders, chronic pain, and even numerous chronic illnesses are all on the list of conditions for cannabis use. This is one of the reasons products like CBD oil or CBD balm have become so popular.

Potentially hundreds of specialized cannabinoids in the cannabis plant have been found to provide therapeutic efficacy, lifestyle enhancement, and even performance improvement to humans. Medical cannabis has been discovered to have a wide range of health benefits for persons suffering from sickness, including eliminating malignant tumors, anxiety and depression, relieving arthritis pain through anti-inflammatory effects, and reducing the number of seizures experienced by epileptic children.

This list of cannabinoids contains the most well-known and studied of these compounds. Tetrahydrocannabinol (THC) is the most well-known cannabinoid, and it’s the chemical responsible for much of cannabis’ psychoactive (psychotropic) and euphoric effects, as well as being used to treat serious diseases like PTSD and cancer. Cannabidiol (CBD), a generally non-psychoactive compound that has been proven to give a wide range of medical advantages, including pain relief, anxiety relief, and depression relief, is another noteworthy cannabinoid.

Like THC, CBD offers therapeutic benefits – but without the high. All of these benefits are thanks to the endocannabinoid system.

Because the endocannabinoid system is found in all mammals, companies and product lines specialized in the health and well-being of domestic pets are starting to appear in legal cannabis marketplaces. Many cannabinoids in cannabis are important to identify, because medical studies show they might improve illnesses like arthritis, digestive difficulties, anxiety, and discomfort.

As you can see in the image above, our bodies are filled with CB1 and CB2 receptors. 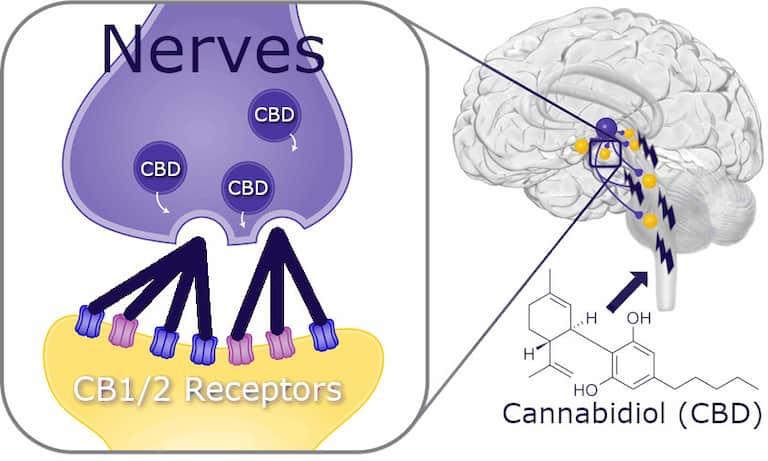 Where Are These Cannabinoids Found?

Check out our variety of CBD goods. Relief is a few clicks away.

How are Cannabinoids Used?

We briefly covered the endocannabinoid system, but not how the cannabinoids are actually used in the human body. The cannabis plant contains well over 124 known cannabinoids, but what does this have to do with cannabis’ medical properties? I’m glad you asked! 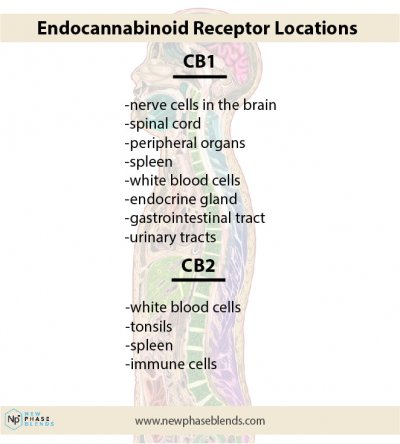 Simply said, cannabinoids interact with the human body’s endocannabinoid system, which means they have the potential to affect a variety of regulatory activities such as appetite, mood, pain threshold, and more. More study is needed to validate the health benefits of CBD and other phytocannabinoids.

Which Cannabinoids are the Most Common?

We noted that cannabis contains well over 124 cannabinoids, but only a few have been well studied. Even so, we only have a limited amount of study on most cannabinoids, and our understanding of how to administer cannabinoids for therapeutic effects is still developing.

Most people are familiar with tetrahydrocannabinol (THC) and cannabidiol (CBD). While THC and CBD are definitely important cannabinoids, there are many more worth exploring. While the endocannabinoid system can utilize THC and CBD, it can also utilize a LOT more cannabinoids.

What are the Top 10 Cannabinoids?

It is hard to claim that some cannabinoids are the ‘top’ ones, because they are all so different. That said, several cannabinoids are beginning to show up in wellness supplements and even certain pharmaceutical drugs. The following are the 10 most common cannabinoids found today:

Every cannabinoid starts their journey in an acidic form. After exposed to heat, they turn into their non-acidic forms. You can still find benefits from acidic cannabinoids, like anti inflammatory properties and other medical benefits.

The Gift of the Cannabis Plant

Synthetically produced cannabinoids are anticipated to become more prevalent, because of how useful cannabinoids found in cannabis are for us. Nabilone and dronabinol are two licensed medications that are currently available that use them for medicinal benefits.

More therapeutic medications containing chemical ingredients for our endocannabinoid systems are likely to emerge as more studies on cannabinoids in cannabis genomes occur. There’s much more to this than simply THC and CBD – these are only the popular cannabinoids. 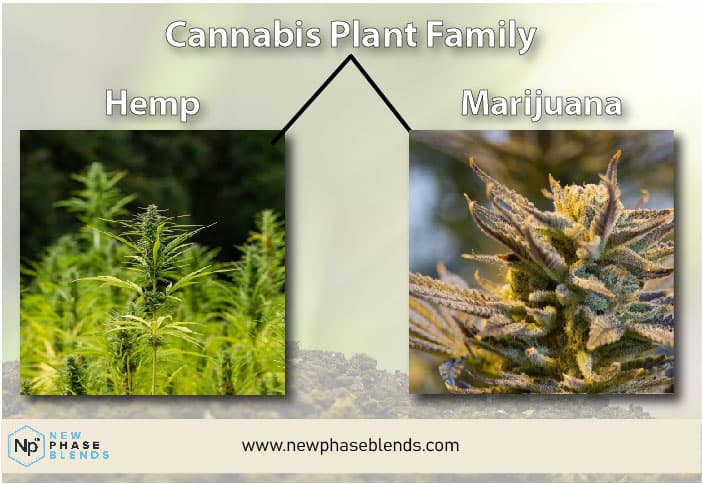 Cannabinoids are studied in a variety of ways, from a physiological, to biochemical, and chemical means of operation. This is the best way to find out potential medicinal benefits. Cannabis is increasingly being viewed as more than just a way to get high in North America. Using cannabinoids as medicine is gaining traction among many people, from lawmakers to celebrities, to regular folks like you and me.

For far too long, research into cannabis’ therapeutic benefits has been stifled. I mean, we’ve had an endocannabinoid system for this long and only recently did we discover this. Fortunately, this is changing in the U.S., which is on track to overtake Spain, Israel, Italy, and Canada as a global leader in research on cannabinoids’ medical qualities.

The human body can benefit so much from the continued studies on cannabinoids found in cannabis.

Whether cannabis is used for medicinal purposes or to get high, one thing is certain: cannabis, and the chemicals found in cannabis, is becoming a bigger part of American society every year.

Check out this picture of the processed resin: 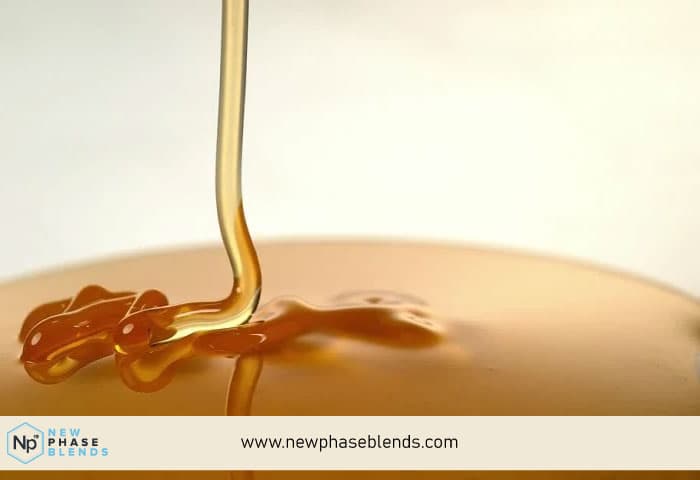 If you zoom in to an extreme level, you can actually see the trichrome structures: 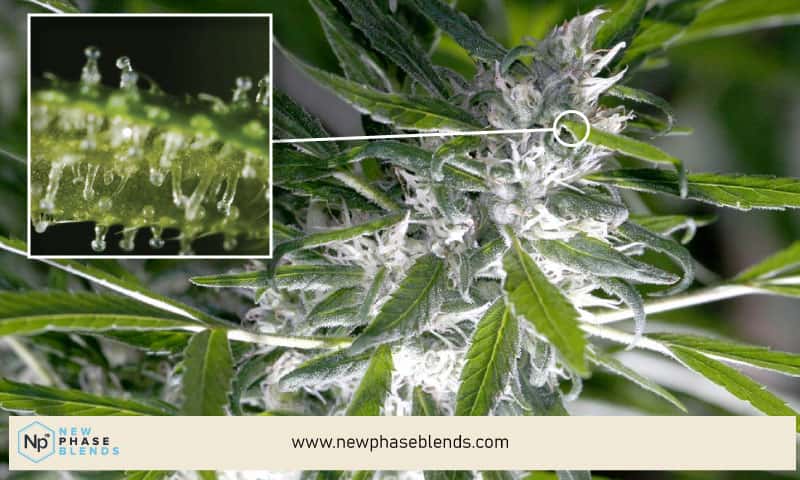 Our bodies can utilize different cannabinoids similar to how endocannabinoids are used. There is a lot more to it, but this is the basic premise.

How Many Cannabinoids Are There?

There are well over 100 different cannabinoids, with that number nearing about 124. Scientists are sure there are more, but they need to conduct more research to find them.

What is the Strongest Cannabinoid?

This is a tough question, because strongest could mean a number of different things. If you take a look at terms of intoxication levels, Delta 9 THC is probably the ‘strongest.’

It has a strong binding affinity for the CB1 receptor, and it can cause people to get high from eating it, or smoking it.

Which Cannabinoid is the Most Psychoactive?

Delta 9 THC is, by far, the most psychoactive cannabinoid that we know about today. A close second would be Delta 8 THC, but since the intoxicating effects that Delta 8 brings last much shorter, the winner for this category does to Delta 9.

What is the Strongest Hemp Cannabinoid?

While we are still figuring out more about this plant chemical (almost on a weekly basis), it seems that Cannabidiol (CBD) is the strongest – at this point in time.

Remember, we are in our infancy when it comes to cannabinoid research. Check back frequently for updated responses as more studies are completed.

What Are the Top 10 Cannabinoids?

To be fair, there really are no recognized “top 10” cannabinoids. For that reason, this answer will vary depending on who you ask. If you classify them in popularity, the following should make most top 10 lists of cannabinoids:

These are in no particular order. As research develops, this list will likely change.

What Cannabinoids Get You High?

Forms of the cannabinoids known as tetrahydrocannabinol, or THC, can get people high. This is why THC is considered a controlled substance. There are several different forms of THC, and while some get people more high than others, they will all get you intoxicated in some way.