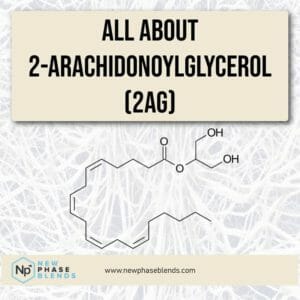 The purpose of this article is to explain some of what is happening each time you take a CBD gummy or capsule. One of the main areas we will focus our attention on is the primary endogenous cannabinoid called 2-Arachidonoylglycerol (also referred to as 2-AG).

When it comes to the ever-increasing popularity of CBD, we are subject to an endless parade of CBD products such as oils, gummies, capsules, vapes, topicals, and more. However, there is a lot of science happening behind each CBD product you’ll find on the shelf or online.

This is a very, very complex article with a lot of scientific terms involved. I hope you are ready!

2-AG has a significant effect on both CB1 and CB2 cannabinoid receptors of the central and peripheral nervous systems in the human body. Specifically, 2-AG is a full agonist for the CB2 receptor and a partial agonist for the CB1 receptor.

2‑AG and other related lipids Long-chain N -acylethanolamides are the ever-present trace constituents of animal and human cells. They are also the tissues and body fluids of human and animal cells. These crucial chemical compounds contain important biological and pharmacological properties that affect many aspects of the unique sensory responses experienced in the human body.

As such, 2-AG plays a crucial role in administering CBD to cannabinoid receptors to protect from seizures, help maintain cardiovascular health, assist with pain management, reduce stress and anxiety, help alleviate depression, reduce inflammation, and so much more!

Without 2-AG the CB-1 cannabinoid receptor can’t be activated endogenously.

The Discovery of 2-AG

With the research of any new food or supplement, cannabis research opened up the discovery of not only 2-AG but also anandamide. Raphael Mechoulam’s laboratory at the University of Jerusalem discovered the occurrence of 2-AG in the mid-1990s.

This breakthrough discovery was successful in establishing the existence of the endocannabinoid system, a neuromodulatory system.

This led to further research into CBD and cannabinoids. This neuromodulatory system is entirely run by the presence of cannabinoids.

It also opened up the world of research into the function of neuromodulators like serotonin, dopamine, histamine, norepinephrine, and acetylcholine. Neuromodulation works by stimulating nerves to elicit a natural biological response, or by introducing targeted pharmaceutical substances in small doses.

By introducing CBD, endocannabinoid signaling takes place and molecules that help regulate processes like immunity, mood, and pain. Besides the cannabinoid receptors, CBD also interacts with other receptors like opioid and serotonin receptors.

These molecules are called eicosanoids and are all oxidized versions of the 20 carbon EFAs. They are an integral and complex part of various bodily processes that include dealing with inflammation and immune responses.

This molecule can be broken down rather easily by the actions of lipid metabolism enzymes. One of the main reasons for this is the long hydrocarbon tail it possesses.

What is the Function of 2-AG?

The most abundant endocannabinoid found in the human body is 2-AG. Like anandamide, its function is to help regulate the immune system function, a person’s appetite, and pain management. Out of all the cannabinoids, 2-AG is one of the most studied endogenous cannabinoids. Studies are still in their infancy, but since 1992, it is believed that 2-AG and anandamide may not be the only two endocannabinoids.

Modern science has yet to determine the full function of 2-AG. One of the reasons for this is due to how quickly it is metabolized in the body. It has been discovered that 2-AG is a signaling lipid and plays a vital role in the function of the circulatory system.

2-AG may affect the blood vessels and heart directly or indirectly.

University of Tokyo scientists discovered that the 2-AG endocannabinoid signaling is an important part of suppressing seizures. 2-AG levels in the human body can be elevated in several ways. One such way is to utilize a mechanism that will inhibit the breaking down of enzymes.

It is suggested from researching these elevated levels of 2-AG that it may play a vital role in controlling neurological conditions and motor skills.

The reason they bind with the cannabinoid receptor is to begin healing that part of the body that is experiencing pain or even anxiety, and giving those areas comfort and relief.

This process of this endogenous cannabinoid signaling is basically the human body’s way of saying that the spleen, the spine, or any other part of the human body needs some comfort from pain.

This is why CBD has been instrumental in helping those that are suffering from pain. CBD acts very much as 2-AG does. It travels to the threatened area, binds with the cannabinoid receptor, and offers relief from pain.

What is the Function of Anandamide?

When people use CBD products, the CBD is indirectly triggering these same receptors. Other cannabinoids can trigger them, too.

The original discovery of the cannabinoid receptors was that they were sensitive to THC (tetrahydrocannabinol). THC is the psychoactive cannabinoid compound found in the cannabis plant.

Researching CB1 and CB2 cannabinoid receptors uncovered anandamide, as researchers were already aware that there would be a naturally occurring (endogenous) chemical affecting these receptors.

Anandamide research of a rat brain indicates that this endocannabinoid may impair working memory. With more studies planned to explore how anandamide affects human behaviors, research is set on the functions of eating, sleep patterns, and pain relief.

The endogenous cannabinoid anandamide is also important during the early stage of embryo development. It is believed that cannabinoids such as THC may influence the first few months of the processes involved in human pregnancy. At ovulation peak plasma anandamide occurs correlating with peak gonadotropin and estradiol levels.

This suggests that it may help regulate the levels of anandamide.

Anandamide may also play a role in regulating feeding behavior and its involvement with motivation and pleasure.

In studies using a rat brain model, injections of anandamide seemed to enhance the pleasure responses of the rats to rewarding sweet taste and enhance the intake of food.

2-AG and the endocannabinoid system are quickly becoming an area worth studying as a form of treatment for various conditions of the human body and mind.

Since it was discovered that 2-AG may be beneficial for the circulatory system 2-AG has been under the radar for other studies including studying the effects of this endocannabinoid signaling in the brain due to neurodegenerative conditions.

What do all of these terms mean and how do they affect other systems of the body? Let’s explore some of the terms associated with the endocannabinoid system.

There have also been studies that show super sensitivity to anandamide and enhanced endogenous cannabinoid signaling in mice that lack fatty acid amide hydrolase.

Ligands are produced by the endocannabinoid signaling cells and they interact with the receptors in or on specific cells. Ligands come in several different varieties.

While some are proteins, others are hydrophobic molecules such as steroids. And then others are gases like nitric oxide. Let’s look at endogenous ligands such as 2-AG.

Transient Receptor Potential (or TRP) are channels that are expressed throughout the digestive and gastrointestinal tract. The TRP has a functional role as a detector of taste.

The area so important in detecting visceral sensation, and are also known to be mediators of motility and secretion.

The endocannabinoid system has received a lot of scientific attention, especially its role in neurodegenerative diseases such as Alzheimer’s disease.

In fact, a dysfunctional endocannabinoid system and endogenous cannabinoid receptor ligand are suspected to be the root of multiple conditions affecting many systems of the body.

This would include immune cells, food intake, the production of human platelets, and modulating anxiety.

Is 2-AG a Neurotransmitter?

Neurotransmitters are molecules that act as chemical messengers in the body. The central nervous system uses these molecules to transmit messages from neuron to neuron, and from neurons to our muscle system.

Depending on the receptor it binds to, it can excite or inhibit responses. In the case of cannabinoid receptors, it inhibits neurotransmission through a presynaptic mechanism (the neuron where signals originate from before traveling to the cannabinoid receptors in the body’s central and peripheral nervous system.)

Since 2-AG is a signaling lipid in the central nervous system and a primary neurotransmitter release regulator, it’s involved with regulating several physiological functions including cognition, emotion, energy balance, neuroinflammation, and pain sensation.

Therefore, because it delivers messages to the cannabinoid receptors, it acts as a neurotransmitter.

2-AG plays a role at the CB1 receptor site and makes it a possible target for conditions such as Alzheimer’s disease, Huntington’s Disease, and Multiple Sclerosis. 2-AG is even thought to play a part in the development of schizophrenia. 2-AG is being researched as a place for the treatment of psychiatric illnesses.

It has become clear through clinical trials that 2-AG may play an important part in the development of human physiology. Combined with its cousin anandamide, these two endocannabinoids will become an area of further scientific study in the treatment of different conditions.