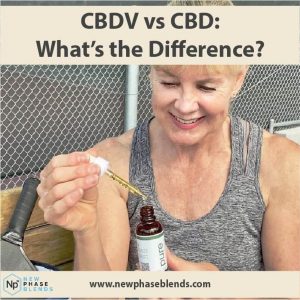 CBDV VS CBD | What Is The Difference Between CBDV and CBD?

There are some slight differences when it comes to CBDV vs CBD. While CBD remains at the forefront of most new cannabis research, CBDV follows right behind.

Both are derived from cannabis plants. However, these are only two out of an estimated 124 identified cannabinoids (plant chemicals) within cannabis. That’s a lot.

In this article, we’ll discuss CBDV vs CBD to see what similarities, and differences, these cannabinoids have.

Cannabidivarin, or CBDV, is a cannabis-based chemical compound that shares almost the same molecular structure as CBD. The slight difference here is the propyl chain that CBDV carries.

It’s one of the several natural cannabinoid compounds produced in the hemp and marijuana pant. It can be found in both broad spectrum and full spectrum extracts.

You have probably heard about THC, or tetrahydrocannabinol, by now the psychoactive compound of the marijuana plant. THC is one of several cannabinoids located within the cannabis plant.

CBD, a non-psychoactive active cannabinoid, has gained popularity since hemp became decriminalized in the United States back in 2018.

While these two cannabinoids remain the most popular, CBDV is following close behind. Interestingly, most people don’t know about CBDV yet.

Enjoy 15% off your order of 'pure' CBD gummies by entering coupon code gummies15 at checkout!

CBD comes with a pentyl chain. Since it’s a propyl cannabinoid, it shares some different properties from CBD. According to drugtimes.org, “Samples [of CBD] having significant amounts of these compounds [propyl cannabinoids] generally come from India and adjacent areas (Nepal, Afghanistan, Pakistan), South Africa and Indonesia.”

CBDV is also non-psychoactive cannabinoid (like CBD). This means it doesn’t get the user ‘high’. Our cannabinoid receptors can process cannabinoids like this for a variety of different effects.

Humans have been using marijuana for thousands of years, and it is reported that someone first produced the cannabis plant in Asia. The central region that CBDV heavy strains are located is in Pakistan, India, and Mexico.

These are places where cannabis plants evolved in their natural habitat. The growers also didn’t crossbreed it with other plants of the same species.

CBDV is mostly found in the cannabis plants that produce high amounts of CBD. Since CBDV is a derivative of CBD, that would make sense, right?

When it comes to cannabinoid extraction of CBDV vs CBD,  people use multiple methods. You see, the amount of CBDV is not high in pure strains of cannabis plants, so scientists like to use cellular agriculture to get enough CBDV for medicinal purposes.

What is cellular agriculture? It’s a form of biotechnology used a lot in food production. Using cellular agriculture means that there can be a considerable yield increase of crops via mixing varieties of plants with, for example, better agronomic qualities, nutritional value, and disease resistance.

CBDV has gotten the acknowledgment it deserves because of its anticonvulsant and anti-nausea properties. The current availability of CBDV strains at dispensaries and health markets isn’t high yet, because of it’s recent developments.

I would expect more CBDV products to become available shortly. Look at how fast CBD blew up it’s only a matter of time.

When we talk about CBDV vs CBD, it’s also important to talk about the potential benefits of CBDV.

Comparing Benefits of CBDV vs CBD

Although there is not much research on CBDV, the little that exists looks promising. Scientists claim that CBDV has several similarities with cannabinoid compounds, like CBD.

These similarities include things such as molecular structure and non-psychoactive properties.

Enjoy 15% off your order of 'pure' CBD drops by entering coupon code pure15 at checkout!

Most of the research based on cannabinoids has centered around CBD as a primary focus, claiming some of the following benefits of this non-intoxicating cannabinoid:

Each compound of the cannabis plant has their own unique identity. Remember, research on CBDV is limited, however, we can reference some studies on its’ anti-seizure properties and anti-nausea effects.

CBDV as an Anti-Convulsant

CBDV shares many similar health benefits with CBD; however, it has some superior elements. Cannabidivarin (CBDV) is gaining popularity as an anti-convulsant and can be found helpful in seizure management.

A study made in 2013 on animal models showed that anticonvulsant results of CBDV potentially decrease pentylenetetrazol (PTZ)-induced seizure severity.

Enjoy 15% off your order of 'pure' vegan CBD softgels by entering coupon code pure15 at checkout!

According to the Centers for Disease Control and Prevention (CDC) report, the number of epilepsy patients is increasing in the U.S, and there are almost 30 different types of seizures that some people must endure.

As more research goes into CBDV as an anti-convulsant, hopefully, some of this will help those who suffer from seizures.

A British company named GW Pharmaceuticals has the license of developing CBDV medicine for epilepsy. The company mainly makes cannabis-based medicines and has demonstrated with this step that they have enough evidence to begin using CBDV in its medicinal development.

This British company focuses on CBDV as an efficacious treatment for epilepsy and autism spectrum disorders.

We need more companies like GW pharmaceuticals because they drive cannabinoid research to the next level.

CBDV as an Anti-Nausea Remedy

A study made in 2014 to further research the anti-convulsant properties of CBDV demonstrated that CBDV and CBD might serve as a treatment for neuronal hyperexcitability (enhanced pain transmission in the spinal cord, typically after a spinal cord injury).

Another research project carried out on rats to study nausea concluded that CBDV might potentially relieve nausea.

When comparing CBDV vs CBD, CBDV has the potential to rebuild bones if they break or fracture by assisting stem cells in our bodies.

That almost sounds like something out of Marvel comics. Could you imagine being able to heal your bones like Wolverine? I know it’s a stretch, but it’s fun to think about!

CBDV’s potential to reduce or even fully eradicate convulsions caused by epilepsy and related symptoms remained the researchers’ primary focus.

The unique strengths of CBDV that have been found so far have bolstered this particular cannabinoid’s credibility. The future of CBDV is just around the corner.

Cannabidivarin might be the next significant cannabinoid the world will witness. When dealing with CBDV vs CBD, both cannabinoids share huge similarities that could be a massive hit in the medical industry because of the therapeutic effects offered.

Cannabidivarin is almost identical to cannabidiol; however, some unique properties make it different and worth pursuing on its own.

CBDV seems to have great potential (so far) to treat people with neurological disorders, epilepsy, and related seizures. The anticonvulsant, antiepileptic and anti-nausea properties of CBDV are incredible but also warrants further research.

Undoubtedly, initial cannabinoid research has revolved around CBD and THC. The investigators and researchers are now emphasizing other terpenes, plant molecules, and cannabinoids such as CBDV, CBG, CBS, and CBN.

CBDV has many unique properties. However, it needs more research to bolster its credibility. To figure out the untapped potential benefits of CBDV, scientists will have to conduct comprehensive research to bring this cannabinoid to the medicinal front more efficiently.