What is CBD Shatter? What About CBD Crumble? Skip to content 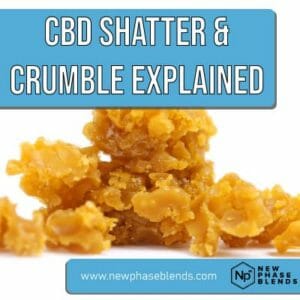 What is CBD Shatter and Crumble?

CBD shatter and crumble are both a highly concentrated form of CBD that has been extracted from hemp, and meant to be dabbed. You can smoke it from other devices too, but dabbing these items seems to be the preference of most people.

In this article, we’ll explain all there is to know about shatter and crumble.

*Editor’s note: New Phase Blends does not sell any inhalable CBD products, due to the unpredictable nature of laws and regulations surrounding smoking hemp-derived products, and potential health hazards. That said, we still are very much into educating people about all there is to know about CBD.

What Does the Term Shatter Mean?

Shatter is a hard and smooth textured, amber colored CBD concentrate that has a honey like consistency when heated. It is quite hard, and very brittle, like glass when not heated. The brittleness is where it gets the name ‘shatter’ from.

It is especially potent, containing up to 80% CBD, depending on the brand you purchase from. Because of its solid state, shatter is usually consumed via vaping or dabbing, delivering high levels of CBD to your endocannabinoid system within seconds.

What is CBD Shatter?

Cannabis use is becoming increasingly legalized in the US and its territories. As at 2022, 32 states have legalized it for medical use, while 17 have legalized it for recreational use. As a result, more and more CBD products are being availed in the marketplace, to cater for the increased demand for stronger and purer variations of the same.

One of these products is called shatter an amber colored form of concentrated CBD that is consumed by dabbing. You can see in the image above

What is CBD Crumble?

Crumble is another form of a CBD concentrate. It has a slightly different appearance from shatter. Crumble looks more like an organic, home made soap, or even a rock. It is still hard, but will easily crumble when handled hence the name crumble.

CBD crumble also comes in extremely potent forms, with a CBD concentration of up to 80%. Like with shatter, people will normally dab crumble since it is so potent.

What is a CBD Concentrate?

CBD concentrates are substances that contain high levels of a cannabinoid in this case, CBD, or cannabidiol. They are also rich in terpenes like humulene, myrcene, linalool and others. Terpenes and cannabinoids work together through a process known as the entourage effect’ to deliver even greater health benefits to the people that use them.

These benefits include pain relief and inflammation reduction.

There are also several different spectrums of CBD concentrates, and these are defined depending on the active components in the extract. The different types of CBD include;

A broad spectrum CBD is going to be similar to full spectrum CBD with the major difference being that it does not contain any THC.

This is a CBD concentrate that contains pure CBD isolate that is left after all the other compounds in a hemp plant are removed during a process known as liquid chromatography.

How is CBD Shatter Made?

Shatter is often referred to as Butane Hash Oil (BHO) because it is extracted using butane or another solvent.

It is extracted though a closed loop system during which hemp flowers and other cannabis source are placed in a column containing butane or other hydrocarbon solvent. The process extracts compounds like cannabinoids, terpenes and others from the plant material.

Once the extraction is complete, the resulting mixture is heated to get rid of as much solvent as possible. The final liquid is allowed to cool, resulting in a yellow or amber colored substance that looks like brittle glass.

Due to the use of heat and other flammable materials, the production of shatter should be left to professionals using the right equipment. There have been incidences of home extractions that resulted in explosions and fatalities.

Benefits of CBD Shatter and Crumble

The obvious benefit here is that shatter and crumble are extremely fast acting and can offer a near instant relief (within seconds). Thanks to its high concentrations of CBD (up to 80% in some samples), shatter has some other health benefits:

CBD has been shown to suppress the action of cells that cause inflammation in the body. As a result it helps to treat inflammatory diseases such as IBS, asthma, rheumatoid arthritis and others.

The endocannabinoid system in your brain is responsible for performing functions such as: sleep regulation, immune system response and pain relief. CBD in its various forms helps to boost these functions, resulting in improved sleep and better immune responses.

It is especially effective in the management of chronic, arthritic and migraine pain. In addition, CBD has been shown to reduce the effects of chemotherapy treatment in cancer patients.

Results from a study by the National Cancer Institute (NCI) found that CBD helps reduce chemotherapy symptoms such as nausea, pain and a lack of appetite.

CBD has been shown to help in the treatment and management of mental health conditions like anxiety disorders, epilepsy, depression and PTSD.

This types of disorders are usually treated with prescription drugs that have a number of effects including: insomnia, weight gain, drowsiness and sexual dysfunction. In addition, a number of these drugs cause dependency, making it difficult for patients to stop using them once they are cured.

CBD helps in the management of these conditions by reducing the intensity of seizures in epilepsy patients, increasing serotonin levels in the brain in order to reduce the symptoms of depression and reducing flashbacks associated with PTSD.

Due to its high concentrations of CBD, shatter can cause hysteria, delusions and hallucinations in some people, especially when it is taken in high doses.

Shatter bought from non-regulated labs or from homemade sources may contain residual butane that was not burned away during the heating process. Butane has been shown to cause permanent brain damage, an increased heart rate and even loss of consciousness.

Homemade shatter may also contain high traces of THC. Not only is this illegal but it also has side effects like nausea, paranoia and anxiety.

Shatter is consumed via vaping or dabbing. This delivers high concentrations of CBD and THC (depending on the product) to the body, causing hallucinations, paranoia and even instances of drug induced psychosis.

In addition, some shatter products, especially those made at home, contain extremely high levels of THC.

Inhaling smoke from these products has the same effect as smoking. There are too many reported issues with vaping to make it safe (in our opinion) to consume regularly.

For those who want to try other forms of CBD, try a CBD oil in stead. When placed under the tongue, the CBD oils will usually kick in within a matter of minutes. While this isn’t as fast as inhaling CBD, it is still very fast and it outweighs the potential risks of smoking.

Enjoy 15% off your order of 'pure' CBD drops by entering coupon code pure15 at checkout!

For safe, healthy, and THC free CBD products, considering shopping at New Phase Blends for a wide selection of oils, gummies, capsules and others.

Shatter and crumble are a form of CBD concentrate made by extracting CBD from hemp flowers or biomass. It has some health benefits thanks to its high CBD concentration. However, it also has some serious side effects so you are better off sticking to safer products such as the oils, capsules, and gummies.